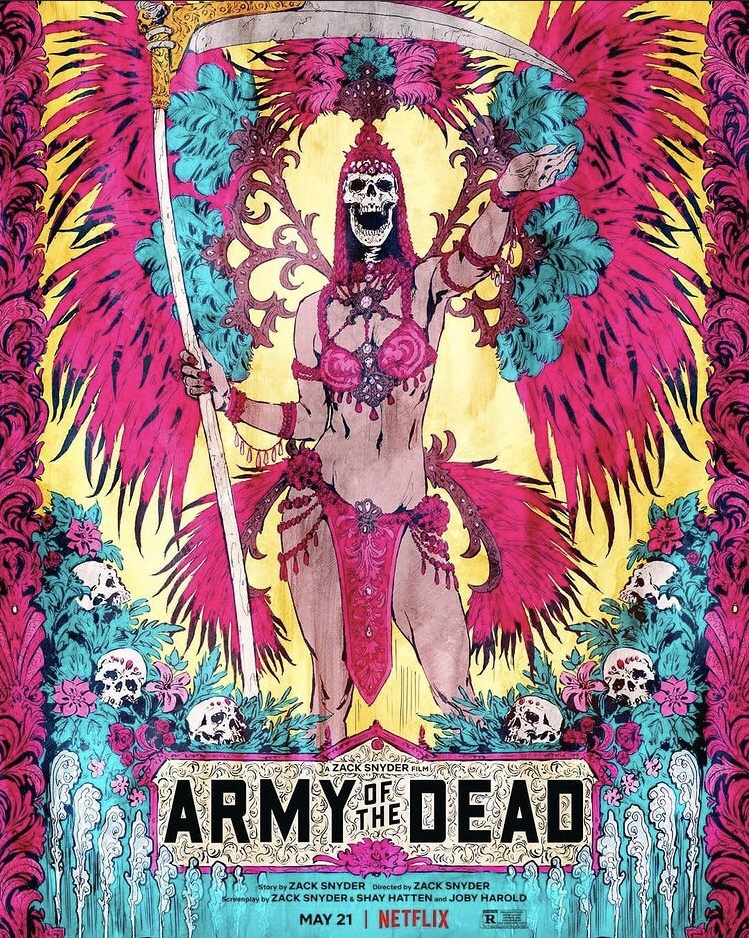 My anticipation for this film was immense. After Justice League and Zack Snyder falling out with DC/WB in 2017 I really wanted some fresh Snyder material. I signed up to Vero just so I could watch Snow Steam Iron when it dropped. As much as I do love Snyder’s take on the DC superheroes I really wanted different things from him. His Dawn of the Dead is fantastic and I’m a huge fan of Sucker Punch. So for me I knew he was capable of doing his own cool things.

I was so happy when I heard that Netflix had bought the rights to Army of the Dead. I’d heard about this project post-Dawn and figured it would never see the light of day given how long it had languished in development-hell. The silver lining to Snyder being out of DC was that we’d now be able to see a different side to him. Netflix giving Snyder creative freedom and a big budget was a perfect way for him to show what he could do.

And wow did he take this opportunity and run with it. Army of the Dead is wall to wall fun but also wall to wall thoughtful. It’s definitely a genre film, and it wears this badge proudly, but it also has a lot of heart. The world building is massive. You feel that each character has their own story, their own unique personality. I really felt for each and every one of them (except the ones I was supposed to not like). Even the zombies are sympathetic. I was very surprised at how deeply I was feeling for the undead.

If you’re not having a good time with this movie it’s because you don’t want to. It’s pretty evident what type of movie this is from the title and the marketing. If you’re not a zombie person, or a horror person, or an action person, or a fun person, just stay away. This is movie is big, glorious action with gruesome deaths and epic set-pieces.

The best thing about the movie is how it treats its “clichés”. It does everything so, so well. It moves within its several genres and does the best version of each of those genres. This is top tier storytelling and it shouldn’t be overlooked just because the stories that it’s telling aren’t pretentious. Few blockbusters are able to balance all these spinning plates and not have some spectacularly break.

I was so happy with this movie and dammit I want more Zack Snyder films. Film is a visual medium and he is one of the best modern directors when it comes to visuals. I’m going to need to watch Army of the Dead several times to fully appreciate it. It’s a very layered film and a very thoughtful film. One viewing felt like only scratching the surface. The two prequels (film and cartoon series) can’t come soon enough. And I hope enough people out there watch this so we can get a sequel.

Snyder shows us his genre talents and leaves us wanting more: ★★★★