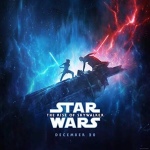 So it’s taken me a couple of days to compile my thoughts on this film. I attended a midnight screening on the 19th but even having that extra time to write a review wasn’t enough. I honestly need to see the film again to fully form my opinion of it but given the time of year that’s tall order. My one viewing will have to do.

So first let me qualify my Star Wars credentials. I saw the original trilogy pre-special editions on VHS. The prequels were the Star Wars of my childhood but I still consider the original trilogy to be superior. I’ve been to midnight screenings the past five years in a row. Still own all of my Star Wars toys from when I was a kid. And my home video collection is so ridiculous that yes…I even own Revenge of the Sith on VHS. I’m a fan.

So talking about The Rise of Skywalker probably first requires talking about the rest of the trilogy first. The Force Awakens was essentially just a quintessential Star Wars story that used this familiarity to introduce a whole heap of new elements that could be explored in the rest of the trilogy. It was a bridge between old and new. The Last Jedi took apart what we expected from Star Wars. It tore down the stereotypes and changed the expectations we have of our heroes. It was embodying this new.

The biggest issue with The Last Jedi becomes a really big issue with The Rise of Skywalker. TLJ does nothing to setup the next movie. It feels more or less wholly contained. Where The Force Awakens created this large sandbox within which to play The Last Jedi was a small movie that was more concerned with themes than plot. It’s as if it didn’t know that it was part TWO of THREE. I didn’t expect that at the end of the sequel trilogy The Force Awakens would be my favourite.

The Rise of Skywalker is very messy. It’s an incredibly fast moving movie and it has to be. A huge portion of the movie is spent establishing a plot that should have been setup in the previous film. It’s not bad stuff but it’s not a good way to do it. It makes the film essentially a film and a half. It really brings to light the biggest shortcoming of the trilogy which is its lack of a singular creative voice.

Though this issue rears its ugly head in this installment it’s not this films biggest problem. The pacing issues aside my biggest gripe was the fan service. I wanted all of the questions answered and I wanted to see all the characters again. But what I didn’t want was the film to be so self aware that it was giving me what I wanted. There’s a lack of subtlety in the film. There’s quite a few details that feel more like studio decisions rather than filmmaker decisions.

In the wake of fan backlash to The Last Jedi and poor box office performance of Solo it appears as though Lucasfilm has tried to ensure that this film meets expectations. But films made by committee never work out. Even if it’s a producer or writer a film series needs someone to control what the story is going to be. Collaboration is fine but contradiction isn’t.

I’m so torn on this film. Like with every Star Wars film we get I’m just grateful to have more Star Wars. I’m excited for the ancillary material that will further tie up the loose ends but I wish that this film was more satisfying on its own. Hopefully I can get past the cringe of the knowing nods and fall in love with the hopeful science fantasy that this film ultimately is.

A film with the hit and miss ratio of a storm trooper: